NELSONVILLE, OHIO – A new era has begun for the Hocking College football team.

Today the college announces Ted Egger as the Hawks’ new head football coach. His official first day with the college is April 6. Egger will also serve as director of coaches and player personnel for the college.

"We are very excited to welcome Coach Egger to Hocking College and Nelsonville, Ohio, to lead our football program," Ken Hoffman, Hocking College director of athletics said. "Coach Egger comes highly recommended as a strong leader and successful football coach at the highest level of competition in the NJCAA.”

Egger was chosen from more than 150 candidates who applied to lead the Hawks into their sixth season.

“My family and I are very excited about the great opportunity to lead the Hocking College football program,” Egger said, mentioning his wife Sarah and their two sons T.J. and Christian. “I believe that by taking care of all the little things it will allow you to accomplish big things. I am very excited that I get a chance to have a positive impact on our student-athletes, Hocking College and the community.”

He takes over the program after three years as head coach and one year as defensive and special teams coordinator at Pearl River Community College in Poplarville, Mississippi.

During his time at Pearl River, Egger instituted a daily regimen of strict team core values and a rigorous academic study program for his players. As a result, the football program rose to a 98% graduation rate with an average team GPA of 3.1.

On the field, Egger led the Wildcats to a 10-17 record, including defeating two nationally-ranked National Junior College Athletic Association teams while playing in what is considered the most difficult NJCAA football conference in the country. Throughout his career, he’s coached or recruited eight players who have had a try-out with an NFL team, signed a free agent with an NFL team or been selected in the NFL draft. 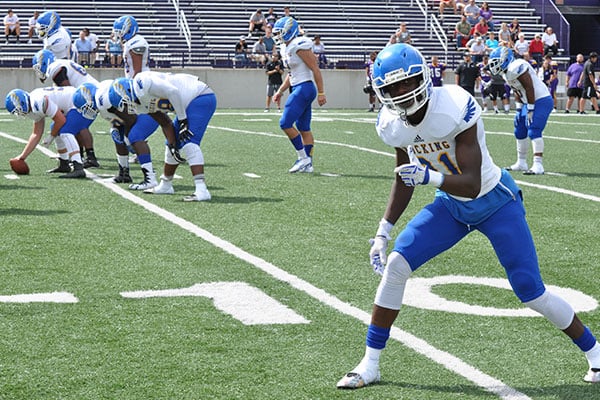 "Coach Egger’s combination of experience and work ethic tells me that he will lead our football student-athletes to high expectations of accomplishment in the classroom as well as on the field of competition and in the community,” Hoffman said. “He will be a strong leader in our community and looks forward to getting involved."

He brought a diverse NCAA Division II football resume to Concordia, having served as defensive coordinator at Adams State University in the Rocky Mountain Athletic Conference. Over two stints, Egger coached six seasons with the Grizzlies.

Between his times at Adams State, he coached defensive backs at three other Division II programs. He served as an assistant coach at Lock Haven from 2004-05, at Ferris State University in Big Rapids, Michigan, from 2005-08 and at Northwood University in Midland, Michigan, from 2008-11. Egger coached defensive backs at all three universities and was also special teams coordinator at Ferris State.

He rejoined the Grizzlies staff in 2011 as the defensive, special teams and recruiting coordinator. During that time, the Adams State defense consistently ranked among the best in the RMAC and the Division II ranks.

As the Adams State recruiting coordinator for five recruiting classes, he successfully recruited 72 of 127 scholarship student-athletes along with 16 mid-year transfers.

Egger’s began his coaching career at Lock Haven as a student assistant coach working with the defensive backs in 2000 and 2001 before taking an assistant coach and recruiting coordinator position at Texas Lutheran University in 2001 and 2002.

"Our goal — from a huge pool of candidates — was to find a man of impeccable character, with experience as a college head coach, who would be a good fit for Hocking College. We found that coach,” Hoffman said.

Egger replaces Adolphus “Al” Matthews who coached the Hawks for the first five seasons of the program, which he started in 2015. Matthews remains with the college in a new position of fundraising and recruiting.