NELSONVILLE, OH - Making a life for the ones we love requires a respect for the place we live. The Robbins Crossing Village, situated at the Hocking College, tells a story of this relationship. The structures that makeup Robbins Crossing came from the surrounding region apart from a few which were built as replicas of the 1800’s era of historical interpretation. Each building served a purpose in the community, and some had several appropriations throughout history. The McInturf Schoolhouse, built in the 1830’s, was once a post-office in Morgan County, an inn, and a barn apart from being a schoolhouse. Each building at Robbins Crossing tells of an anthropologic origin one closely linked to natural resources.

The inception of Robbins Crossing came to the Hocking College as an 1800’s Pioneer Interpretive Village circa 1800’s through the pioneering efforts (pun-intended) of Professor Ron Black. A book was written in 1992; “Planning and Presentation of Tours, The Art of Interpretation” by Ron Black, that serves as an active reference for the operations of Robbins Crossing and is housed on-site at the Interpretive Library. Interpreter James Burcher holds this as an open-book in his hands. At Robbins Crossing, James takes on character in the first-person of a wood wright living peacefully after the war in the pioneer village. James enacts the person as true to character, downed in costume as if he were a real woodworker situated in the 1800’s. Playing a dual-role, when the Hocking Valley Scenic Railway Train comes, James may be seen ushering the visitors to Robbins Crossing from aboard the train. The steam engine train departs from Nelsonville, Hocking Valley Scenic Railway rolling through the Appalachian foothills sister to Ohio's Winding Roads, plumes of steam exhausting from the steam engine, before passing by the Hocking College on the adjacent train tracks.  As the train halts to a gradual stop at the village James leaps off the train and ushers the passengers to the village. The community enjoys warm kettle-corn cooked over an open-flame with a handsome-sized kettle, a crowd pleaser for sure.

Emily Elam, an Interpreter of Robbins Crossing, wears the 1800’s pioneer attire beautifully working with her hands to separate the wool gathered from the village sheep to rove into a useful form woven on the loom and spun into yarn on the spinning wheel located in the Anthony Home. The story of the Anthony Home, composed of two different structures as deduced by the presence of a rock-chimney on one side and a brick-chimney on the other. The original separate buildings are postulated to have been built in 1824 and then joined together in the 1850’s. 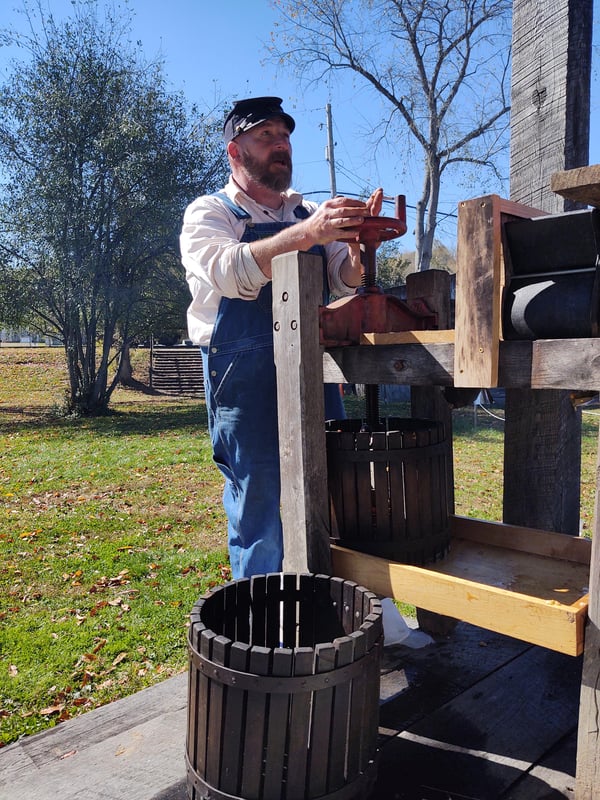 The Blacksmith Shop was constructed in 1988 by volunteers of the Youth Civilian Conservation Corps to historical accuracy. The Appalachian Mountains are abundant in natural resources, one being coal. Coal for Southeast Ohio Appalachia has a distinct smell of sulfur, cadmium, and other heavy metals go-up-the-chimney coming from the forge. The bottom of the forge has an ash gate than may be opened to dump the leftover ash. The forge burns up to 2000 degrees Fahrenheit. The coal is changed to coak as the impurities are burned out and will then burn at a much higher BTU rate and will float in water. Welding is achieved via placing two pieces of metal into the forge and then hammering them together on the anvil. Welding equipment at the Hocking Makers Network Welding Lab Makerspace of the Hocking College shares similarities to the forge from the Blacksmith shop of the 1800’s.

Lumber to build the Pioneer Village

Iron Ore from Hanging Rock Ore in Vinton county was extracted and brought to Robbins Crossing. The slag from the iron furnace is the impurities that run out of the iron-ore and what comes out of the iron ore furnace is pure iron. Clinkers are the heavy metal slag from the coal that burns. Rusty, the Hocking College Blacksmith Interpreter, says that people would cover roads with slag that was ground up to prevent slippage. Iron can be combined in the forge with coal in a heat past 1450 degrees where it is no longer magnetic. At curing temperature, the metal alloy becomes pliable and an edge can be shaped into a knife. This is the tempering of steel and can be seen through changes in color where colors are indicative of properties of the steel in the making. Tempering steel made useful tools for the people of the villages. Such as a civer to cut grass. Knives, forks and spoons, ladles, hooks for the wall made for the homestead along with horse shoe, glass frames, metal chains were all hand-made by the Blacksmith. Thanks to Interpreter Hanah Duncan and the Blacksmith Rusty Nitsch for installing this game; visitors may play the reminiscent pioneer game “hook-and-hoop” when visiting Robbins Crossing.

Rachel Stewart, an Interpreter at Robbins Crossing, comments on the way life was during the 1800’s living in the village “there was the General Store… but you would make most of the items yourself”. Trade and barter were common in the pioneer exchanges where a useable material was valuable for sharing and obtaining needs. Village people met their needs as a combination of hand-made items and as customers to Robbins Crossing Village Kidner General Store. The Kidner building is a modest 18 x 22 foot General Store built in the 1867 and brought in to the interpretive village from Westerville, Ohio fortunately situated at the intersection of two main roads formerly known as Hickory Point. Rachel continues “If you had surplus you could barter and trade for goods and services”. The Kidner building was constructed with two porches and a wooden stage attached to one side. Presented with such representations of history we may interpret how trade and business happened during the 1800’s. Historians, Anthropologist, and Interpreters use the remnants and stories of a time before-the-present to understand what life was like in relations to our belief systems currently. Walking through the Robbins Crossing Village one can live vicariously for just a moment, taste the kettle-corn, see your neighbors, notice the farm-animals roaming through the village, and be part of a community. The heart of community belonging and enjoyment is felt when visiting Robbins Crossing!

The Hocking Makers Network wishes to echo the community engagement that Robbins Crossing embodies through historical interpretation only through the lens of the person whom makes art and uses natural resources in a just and humane way. In speaking with the Interpreters, we come to find that there is a deeper value that resonates with the Robbins Crossing Village and that we ‘yearning for community, to be connected to one’s work, and to cultivate a deep respect and appreciation for the land we inherit’. The Hocking College represents these morals and values through the student body, the programs, the dedicated instructors and employees, and through the connection with the community.

Robbins Crossing is a historical interpretive village, and home to a satellite farm of the Agroecology program. Sasha Sigetic, Agroecology program manager, has a presence with the students as she demonstrates the spirit of learning by being seen nurturing farm-animals and respects the ecosystem. Piglets born at Robbins Crossing this year were raised during the start of the school year and provisioned for education purposes and local markets. Dan Kneier, Farm Manager for the Agroecology Program with students Emily Elam and Heidi Moulton whom tend to the plants, host a “veggie box” supply available to the Hocking College with nutrients packed into the produce from the regenerated, mineral balanced soils of the farm.

We learn from our history, we take these lessons into current practices, and we have in our hearts the community. The Hocking Makers Network connects you, the Maker, to your roots and to the value of making from natural resources and belonging to a community. Raven Anderson, a Hocking Hill native and an Interpreter at Robbins Crossing succinctly resonates this connection when speaking of a woman she knows “…she made a crochet dress by hand. And she wears the dress!”. And Colson Barnett, an Interpreter chimes in with a lesson he regards in the business of living “to not let your fears outweigh your curiosity or you will miss opportunity”. Visit your local Makerspaces! Visit Robbins Crossing! Experience the rich cultural heritage of the beautiful land of Southeast Ohio Appalachia.