NOTE: Kennedy Gulas received the Hocking Heroes Award for her actions at Little Wildhorse Canyon. The award recognizes alumni who do essential and extraordinary work in their communities and the world. If you’d like to nominate someone, visit the Hocking College Foundation website and fill out the Hocking Heroes Nomination Form.

When Kennedy Gulas made a stop at the San Rafael Swell in Utah, she never expected to put the training she learned as an Ecotourism and Adventure Leadership graduate to use to try to save the lives of two young girls.

Gulas stopped at the swells while on a long road trip, returning to a place she remembers fondly from the Adventure Leadership "Big Trip" during her first year at Hocking College. The Big Trip is a two-week trip into the field where students put the skills they've learned in Adventure Leadership to the test.

"I'd never been to slot canyons before, or even Utah in general," Gulas recalled. "The trip is still one of my favorites."

A native of Catawba Island Township in northern Ohio’s Ottawa County she looked forward to reliving some of those happy memories this year.

Then the rain started.

The San Rafael Swell is starkly beautiful. Part of the larger Colorado Plateau, the swell is approximately 3,000 square miles of valleys, canyons, gorges, mesas and buttes in south-central Utah. Still, for as breathtaking as it can be, it can also be dangerous.

The steep and narrow slot canyons — so small in some points that hikers have to turn sideways to pass through them — can present challenges for visitors on a day with perfect weather, but when heavy rains fall, they can quickly become deadly. 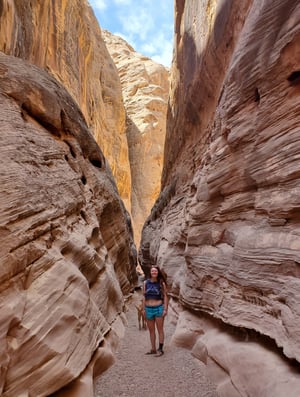 Gulas, a 2018 graduate of Hocking College, said her Mother's Day weekend trip near Goblin Valley State Park in the swell was going fine. The weather was "perfect," and the chance of rain was only 10%, but that changed quickly Monday afternoon, May 11.

"The ranger station got a 15-minute warning about a severe storm, but you could hear and see the thunder and lightning for about 30-45 minutes before it started to storm," Gulas recalled.

The rain came down hard and fast, with nickel-sized hail, flooding the canyons. Turning the bone-dry paths into fast-moving rivers.

Gulas and her friend had taken shelter in his car near a ranger station at the state park. After more than 40 minutes of heavy rain, she went to her van in an outer parking lot to close her windows.

"I was sitting in my bed and had just closed all the windows when a black SUV flew up the road honking like crazy," Gulas said.

As she watched out the window, she immediately knew something was wrong. A man jumped out of the vehicle and ran inside the ranger station, yelling for someone to call 911.

"He ran to the back of the SUV, opened the hatch, and there is his daughter laying on the laid down back seats and trunk," Gulas said. "My stomach dropped. I didn't want to go out, but then the dad yells that he doesn't know CPR and no one else there did either." 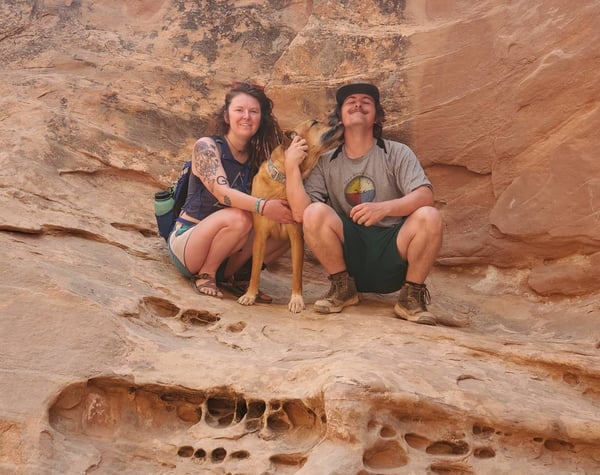 Gulas holds certifications in CPR, wilderness first responder, swift water rescue and vertical ropes and rappelling, among others, from her time at Hocking and working various jobs at parks and resorts throughout the country. She and her friend ran to the SUV.

She led the CPR efforts on the seven-year-old girl for the first ten minutes, quickly teaching three others how to do the potentially lifesaving skill. Eventually, four other people certified in CPR arrived to jump in and rotate as they waited for about 50 minutes for an ambulance to reach the secluded area.

KTVX-TV later reported that the girl had been hiking with her mother, uncle and three-year-old sister when the flash flood occurred. Their father had been waiting at the trailhead.

"When (the father) saw the floodwaters come down, he actually retrieved his 7-year-old-daughter, and he began trying to resuscitate her. Then he got some assistance, and that's when we first got the call. He then left that area and proceeded downstream to find his 3-year-old," Janalee Lucke, Emery County public information officer, told the station.

Emery County Sheriff Greg Funk told the Deseret News that the four hikers were about 3 miles into the Little Wildhorse Canyon near the state park when the flash flood swept them another 2 to 3 miles. The sisters died as a result of the flash flood.

Gulas joined a group of three current and former park rangers as they set off to search for the younger daughter. Because of her certifications and experience, she was the only bystander the park rangers allowed to join the search as the rain resumed falling.

She said she wanted to take part because she "felt very invested in the search and the family."

"When you're invested in attempting to keep someone alive, especially a young girl, it feels weird to leave the scene before you feel like you have done everything you can," Gulas said.

Gulas said the terrain was still dangerous as the group began to search.

"I was in the canyons the day before, and it was completely dry," Gulas said. "Going back into Little Wildhorse Canyon, it was unbelievable to see the difference."

The trail was a river. It completely covered the 4-foot rock drop-off Gulas had lunched at the day before. At times she and a former ranger trudged through shin-deep mud and waded through knee-to-waist deep ice cold water. A 12-foot rock drop-off had become a waterfall.

After six hours, the search was called off because of the encroaching darkness.

Search and rescuers from around the area had found several other hikers who'd been trapped by the flood, but not the three-year-old. The Salt Lake City Tribune reported that about 21 hikers made it out of the canyon safely.

The search for the 3-year-old continued Tuesday morning with the Deseret News reporting that more than 80 people took part. Searchers found the girl's body 28 miles from where the family had been hiking.

Gulas said the experience was "terrifying and nerve-wracking at first."

"I had never had an experience like this, but during it and afterward, I realized how much I had learned at Hocking and from my jobs that prepared me very well for everything," she said.

"Thinking about the stories Jon Tobin told us about his search and rescues helped too," Gulas said of her former vertical ropes and rappelling instructor. "Just knowing that I had someone with so much knowledge training me helped, and it really showed when I had to put those skills into action for real this time."

"I believe Kennedy's ability to intervene during such a tragic situation will not only bring the family of the children some peace that everything that could have been done was done but gives further proof of her heroism," Jennifer Johnson, another of Gulas's former instructors and the manager of Hocking College's Ecotourism and Adventure Leadership program, said.

Gulas isn't sure about calling what she did heroic.

"I don't know if I would say heroic, but I am definitely glad and grateful I was at the right place at the right time," she said. "Being on the scene with the knowledge I have so early helped the situation a lot. If I wasn't there, the outcome would have still been the same, but being there when the dad rolled up with his daughter in the beginning, and being an extra person to be in the first search and rescue was helpful. Everyone that was first on the scene was amazing and did everything they could to help."

"The Ecotourism and Adventure Leadership program strives to ingrain students with the skills and attitude necessary to handle situations like the one she encountered," Johnson said. "I'm honored to have played a part in her professional development, and I couldn't be more proud of her."

For her part, Gulas said she hopes the incident will spur others to become certified in CPR and other potentially lifesaving techniques.

"When I was taking my classes, I never thought I would just be visiting an area and have to use them," she said. "I never thought I'd be the only person on a scene who knew CPR or had any kind of training. Always re-certify your training, and if you don't have any certifications, at least get your CPR, especially if you have children or work with them."

Gulas's travels continued after the tragedy in Utah. She's in Oregon now and plans to continue traveling the country working seasonal jobs at resorts and camps in Colorado, North Carolina and California, among other places.

She even got an offer to come back to work in Utah.

"When I was talking to the rangers about their jobs after the search was called off, I mentioned all of my certifications and qualifications," Gulas said. "The two rangers working there said I was as qualified as them, and encouraged me to come back and take one of the seasonal jobs at the park when they open up."

"As long as it's not during the winter season when I teach adaptive snowboarding and skiing to people with disabilities — that's my main and favorite job that I try to go back to every season — I'll probably go back," she said. "After everything that happened at the canyon, I feel very connected to that place and will for sure work there at least one season eventually."

What is Ecotourism and Adventure Leadership?

Students in the program learn skills that make them top-notch outdoor recreation professionals.

At Hocking College, students experience unique training opportunities, learning on the school's 2,300-acre campus in the heart of Appalachian Ohio.

If you're ready to start on your path to an exciting career in Ecotourism and Adventure or have questions about the program, contact Program Manager Jennifer Johnson by email at johnsonj10298@hocking.edu or by phone at 740-753-6279.