NELSONVILLE, Ohio—The ping of the metal bat will soon fill the air at Hocking College as the school launches a new softball team for the 2021-22  season. 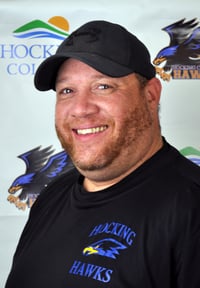 Kevin Lewis has been named coach of the team.

Lewis brings more than a quarter-century of softball and baseball training experience to the role, as well as coaching at the high school and collegiate levels.

“I’m excited to help start the softball program at Hocking College,” Lewis said. “The chance to start a program from scratch is exciting. I love a challenge.”

After injuring his rotator cuff while playing for the Springfield Capitals of the independent Frontier League, Lewis went home.

“I did what all ex-ball players do: sit at home and sulk,” he said now with a laugh.

A friend had other ideas.

“He forced me to go play a fast-pitch softball game with him,” Lewis said. “I’d never played before. I’d never wanted to play before, but I fell in love with it that night.”

Lewis still plays competitively on a travel team that plays throughout the country. He no longer pitches, instead he plays first and third base.

Years later when the father of a client asked if he’d be interested in coaching high school softball Lewis’ first instinct was again to say no.

“I coached my daughter’s softball team when she was seven,” he recalls saying at the time. “All they did was cry. I’m not cut out for that.”

“I finally decided to check it out and interviewed for the job, got it and I haven't touched a baseball field since,” Lewis said.

Lewis coached that first team for three year. The team was listed in the statewide ranking all three season and went to the state championship game his third season. During those years Lewis was named district and regional coach of the year and coached that All-Star game for the Michigan High School Athletic Association.

Starting a program from scratch won’t be the only challenge for the Vicksburg, Michigan-native who moved to southeastern Ohio for the opportunity to coach.

“When I coached junior college in Michigan I could go to a high school tournament and half of the coaches would know me and want to steer their players toward my program,” Lewis explained. “I don’t have that luxury here yet. That’s exciting.”

Lewis moved to Ohio about a week after the high school season began, but within a week he’d already been to 10 games to meet coaches and players.

“I’ve been out to games every night except one talking to people,” he said. “My family is back home. All I have to do here is watch softball and recruit.”

When asked what all needs to be accomplished to start the season Lewis quickly listed: renovating Polley Field in Nelsonville to serve as the program’s home, hiring an assistant coach and signing student-athletes.

“Right now I have every hole to fill,” Lewis said of the team. “When you’re out talking to players and you’re starting a team you’re basically telling them ‘You’re going to start.’”

Lewis said he’s aiming for about 11 players this season, a combination of freshman recruits and current students returning in the autumn, and 18-20 the year after that.