Currently, an Addiction Counseling program major, Porter — who is also the acting president of Hocking College’s chapter of Phi Theta Kappa — noted that “it feels great to see my hard work pay off.” 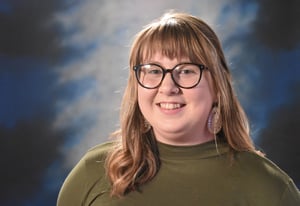 According to Porter, applicants were judged based on their GPA and an original 500-word essay describing they’ve applied what they’ve learned in their classes to their respective communities.

Last year Porter was one of 207 Phi Theta Kappa members to be named a 2019 Coca-Cola Leaders of Promise Scholar and was awarded $1,000.

Porter says she wants to recognize her parents, the TRIO faculty, her peers in her Addiction Counseling classes and Hocking College for all the support she’s received over the past two years.

After Porter graduates from Hocking College, she plans to attend the University of Cincinnati and later pursue her master’s degree at Ohio University.

More about the Coca-Cola Leaders of Promise Scholarship

The Coca-Cola Leaders of Promise scholarship program was created to benefit new Phi Theta Kappa members enrolled in an associate degree program. The goal is to help them defray their educational costs by connecting them with the financial resources they need to realize their academic aspirations.

Founded on November 19, 1918, PTK is the world’s largest organization recognizing the achievements of honor students at two-year institutions. The society is made up of more than 3.5 million members from 1.300 chapters in 11 different nations.

How can I join Phi Theta Kappa?

Some of the advantages of becoming a PTK member include:

For more information on Hocking College’s chapter of PTK, contact Susan Dietz by email at dietzs19941@hocking.edu or by phone at 740-753-6514.