While dogs are man's best friends, they’ve also helped save countless lives by serving in the military. March 13 is K-9 Veterans Day, a day in which everyone can reflect on the importance and impact military dogs have today and throughout history.

Dogs in war have been around for centuries but the first major modern war they were used in was World War I. Nearly all major parties in the war had war dogs except the United States. At one point during the war, Germany alone had more than 30,000 military dogs. It wasn't until late in the war that the U.S. began to see how impactful they could be. Dogs were used as messengers to run between trenches. Medics could medical supplies on a dog’s back and send it to the wounded.

The U.S. had one of the best dogs of war and didn't even know it. Sgt. Stubby was an American Bull mutt who had no home and was found wandering the campus of Yale university while soldiers were training there. A soldier named Conroy grew fond of him and wanted to take him with them when they shipped out. He hid the dog until it was discovered by his commanding officer. Stubby saluted the officer as he was trained to do. The officer liked it and allowed the dog to be with the unit overseas. Stubby was with them in the trenches of France, was part of 17 battles and was injured during a gas attack. After he recovered they made a specially fitted gas mask and he was back in the trenches warning the unit of incoming attacks from gas, artillery and soldiers. Stubby is given credit for capturing a German spy, for this action he was recommended for the rank of sergeant. 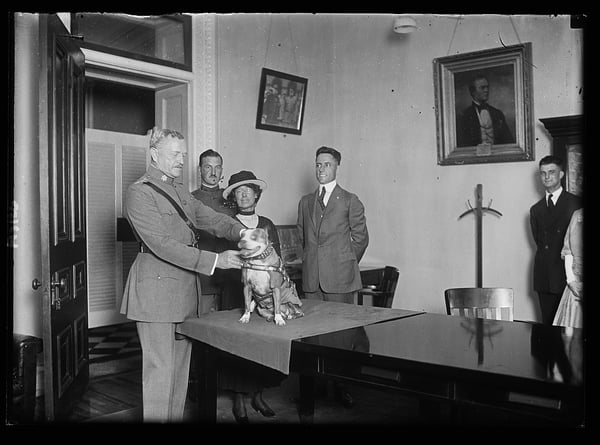 After the war, he returned home with Conroy as the most decorated animal war hero. Stubby became a celebrity, led parades and met three sitting Presidents. He would later become the team mascot for Georgetown University. Stubby passed away in his sleep in 1926. After his death his body was preserved and later given to the Smithsonian Museum where it is on display today.

When World War II began the United States was determined not to be as far behind as the last war. Civilians not wanting to make the same mistake founded Dogs for Defense, Inc. and encouraged pet owners to give their pets to the army for training to be sentry dogs, essentially guard dogs, that would perform patrols. It was during this war that it was that discovered dogs could be used in a combat scenario.

Americans used their canine companions primarily in the jungles and harsh terrain of the Pacific Theater. They were used to alert the soldiers of enemy forces up to 1,000 yards away, allowing U.S. troops to counter-ambush attacks. Dogs were a vital part of weeding out the hunkered down enemy.

One of the most shocking ways dogs were used was by the Soviet Union.

Soviet dogs were as anti-tank weapons. They would train dogs wearing explosive vests to run under tanks. When the explosives in the vest would denote under the tank it would become disabled. This would work a few times but for the most part, it was ineffective.

Part of the problem was that many of the dogs refused to dive under the tanks in the field. They were being shot at, which hadn’t happened in training and would run back to the handler, the bomb still attached. The Soviet Union and later Russian military trained anti-tank dogs up until 1996. The practice has since been abolished.

The Soviet Union wasn’t the only country to misuse and mistreat their four-legged fellow soldiers. With the harsh jungle environment for U.S. troops, dogs were used for scout teams to sniff out the hiding Viet Cong. Tunnel dogs charged with going ahead of the unit and finding booby traps, mines and going into tunnels to flush out the enemy.

The confirmed list of dogs used in the war was 3,747 but it is rumored there were more than 4,900 used. It is estimated that they saved more than 10,000 lives in their years of service. When the U.S. ended the war only 204 dogs exited the war some stayed in the Pacific some when back to the States but none ever returned to civilian life.

There were 3,000 surplus dogs at the end of the war. Most of them were euthanized or given to the South Vietnamese Army. Others were simply left in Vietnam to fend for themselves. Dog handlers fought to try and bring them home, but their requests fell mostly on deaf ears.

The episode was kept behind closed doors until in 2000 President Bill Clinton signed a bill into law that would prevent military dogs from being left behind.

Today's military dogs are generally better off. Handlers and dogs are a team and form an unmatched bond. They provide a pivotal role in detecting roadside bombs in the streets of Iraq and Afghanistan. After they serve they get to have a normal life. More than 90% of them get adopted by the handler they went to battle with. If the handler can’t take them they’re put up for adoption and are retired.

Military dogs are no longer the undervalued equipment that they were thought to be, they are valued and respected. They earn medals of bravery. There are memorials and statues all across the country.

If you want to help military dogs, consider adopting a retired one that is still looking for a home, or go to a local shelter and volunteer. Every animal could use some love

This blog was written by Dakota Crist, a student intern in the Marketing Office at Hocking College. Dakota is in the Animal Assisted Therapy - Canine program. He hopes to either open his own boarding facility in the Hocking Hills or work as an investigator for the Humane Society.