Rosa Louise McCauley Parks (1913-2005) was an African-American activist who helped propel the American Civil Rights Movement through a now-iconic act of bravery. 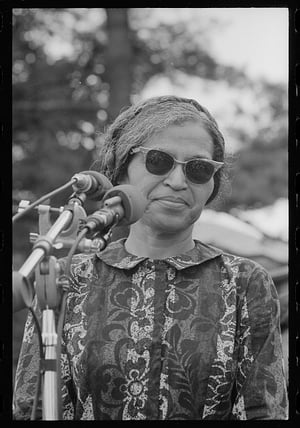 On Dec. 1, 1955, Parks was a seamstress working at a department store in Montgomery, Alabama. At the end of her shift, Parks boarded the Cleveland Avenue bus headed for home.

She took a seat in the first of several rows designated for "colored" passengers. After sitting down, the bus began to fill up rather quickly. Although the Montgomery city ordinance allowed bus drivers to assign passengers seats, it did not give them the authority to demand that certain passengers forfeit their seats.

Regardless, the driver on the Cleveland Avenue bus asked Parks to give up her seat. But instead of complying, Parks refused the driver's request and remained in her seat.

Parks was arrested and charged with violation of Chapter 6, Section 11, of the Montgomery City Code and was taken to police headquarters, where she was released on bail.

Because of her involvement in the Montgomery Bus Boycott, Parks and her husband Raymond faced an overwhelming amount of harassment in Mongomery. It motivated them to relocate to Detroit, Michigan, where Parks worked as a secretary and receptionist in the office of U.S. Representative John Conyers Jr. from 1965 to her retirement in 1988.

In 1987, Parks and her longtime friend Elaine Eason Steele, Parks, founded the Rosa and Raymond Parks Institute for Self-Development. The organization created bus tours entitled "Pathways to Freedom." The tours introduce future generations to specific sites associated with the Civil Rights Movement and Underground Railroad throughout the country.

In 1992, Parks published her autobiography, "Rosa Parks: My Story." The book recounted her life and legacy in the segregated South. In 1995, she published a second memoir, "Quiet Strength," that focused on faith's instrumental role in her awe-inspiring life.

Parks also served on the Planned Parenthood Federation of America board, headed the Youth Division of the Montgomery NAACP branch, and was the recipient of the Congressional Medal of Honor and the NAACP's Spingarn Medal.

In 2000, the California State Legislature first created Rosa Parks Day. This American holiday was originally celebrated on Parks birthday, Feb. 4. However, states like Ohio and Oregon instead celebrate RPD on Dec. 1 to commemorate her historic arrest.