At Robbins Crossing Historic Village, students get an in-depth look at mid-Victorian life, which includes an intimate look at funerary traditions in the month of October. Read on to discover some of the unusual and dangerous traditions that were popular in the time period our students learn about and interpret for visitors at Robbins Crossing. 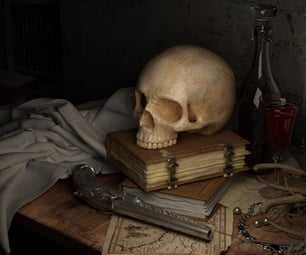 The mourning industry in the Victorian era was incredibly lucrative and was equivalent to today’s wedding industry. The amount of money you spent on a funeral was considered to be a reflection of how much you were respecting the deceased person. Therefore a whole range of products and services were available to the mourning individual, but for a price. Mourning clothes, dishes, stationary, accessories, and decorations were very fashionable. Some historians even think that the demand for mourning clothes prompted today’s ready-to-wear fashion industry.

The mourning attire for women often demanded total coverage so that they could grieve in private without anyone seeing. In order to do so, this required women to wear full-length veils which were often between 6-8 feet in length. Interestingly enough, these veils were made using arsenic, and the women wearing them often experienced breathing problems or skin burns due to the proximity of the chemical. This caused many physicians to speak out publicly against such practices as it is suspected that several women died because of it.

3) The Cost of Tears

Mourning practices required that funeral attendees be properly bereaved. If a family could afford it, professional mourners could be hired to represent the appropriate level of sadness. Services ranged from offering a somber and solemn presence at professions, to all-out wailing at the graveside service. It also allowed for someone to be present to show sadness in the absence of a wife, who was often encouraged to stay home so she could grieve in private instead of attending the funeral. 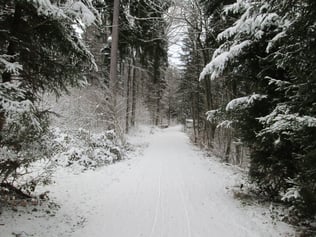 Victorian life was harsh and thus even the daily routines were filled with reminders of mortality. Frozen Charlotte Dolls were a popular kitchen accessory, and used in everything from soup to hot chocolate. These small porcelain china dolls were used to cool hot liquids, but came with a eerie tale, which was of a young girl named Charlotte who froze to death after she refused to wear a cloak on a winter evening for fear of covering her beautiful ballgown.

Drawing on the old immigrant traditions of sin eaters (citizens who ate leavened bread placed on the deceased’s body in order to “eat their sins”), Victorian funerals often featured funerary biscuits or cookies. These cookies were placed upon the chest of the deceased in order to absorb their spirit. They were then distributed as mementos of the deceased to funeral guests. As the industry evolved, bakeries began to make and market these cookies, and wrapped them in packages featuring mourning poems, death notices, and advertising that featured their ability to make these treats on short notice.

Before photography became available, family members didn't often have a tangible way to remember the deceased so they found creative ways to keep the dearly departed close by. These items, called memento mori, were often pieces of jewelry or art made with the hair or teeth of the deceased in order to serve as a memorial. Items would include lockets or wreaths which contained their relatives’ hair. However, as photography became more and more accessible, this tradition eventually died out.

While many of the pictures you see online are fake, Victorians often took pictures around the coffins of the deceased, particularly when it was the death of a young children. Since lifespans were short, this was sometimes the only picture parents and siblings would have of the deceased. This tradition also faded out as science and medicine brought about lengthier lifespans (and photography became quicker and more commercially available), allowing for photographs of children in the later Victorian years.

Caskets and grave sites in the Victorian era often featured ironworks in the form of cages for the coffin, or the construction of elaborate fences around the grave itself. These structures, which were falsely attributed to a Victorian fear of zombies, were actually designed for more practical uses. Casket cages were helpful in case a southern graveyard flooded, keeping the body and casket together for easier identification and reburial. Gravesite cages were also constructed to keep grave robbers out in order to keep them from stealing bodies to be used for medical research.

In the era before modern science and medicine, superstitions surrounding death were common. For example, deceased persons were carried out of homes feet first to ensure that the dead spirit would not beckon others to come with them. Windows were shut and curtains drawn so that the soul would not depart before the funeral. In addition, pictures and mirrors were also covered to ensure that the soul of the deceased did not get trapped inside the house. These and many other traditions dominated Victorian funerary traditions.

If you're interested in experiencing a Victorian funeral procession or seance, students in the Natural and Historical Interpretation program will be putting on a full Victorian Mourning event from 11AM to 5PM on Saturday, October 20 and Sunday, October 21 at Robbins Crossing. Join them and see history come alive!