Barbourville, KY -- Hocking College travelled to Barbourville, Kentucky over the weekend to participate in the 2017 USCA 3D South Regionals in their first competition of the season. This was the largest regional in the country and the largest regional competition to date in the USCA. The Hawks weren't intimidated and wasted no time picking up right where they left off last season bringing home two Gold Medals from the Regional in Women's Basic Bow and Men's Basic Bow.

In the Women's Basic Bow Competition the Hawks had a very strong showing taking 1st place, 2nd place and 4th place. The Women's Basic Bow Champion shooting a score of 227 was Sophmore Archer Samantha Smith. Smith was followed by Caitlin Hartman who shot a 207 that was good enough for 2nd place and Emily Baker who shot a 148 to bring home 4th place in the competition.

In the Men's Basic Bow Competition the Hawks had one lone shooter in Freshman Tristen Cahall. Tristen wasted no time making his presence felt on the National Level as he walked away the Champion of the Men's Basic Bow Division. Tristen shot an astounding 260 to bring home the Gold Medal.

The Hawks had 12 other members competing that day and here is how they finished in their respective divisions:

Finally in the Men's Compound Division Hocking sent 5 shooters lead by Sophomore Hunter White pacing the group with a 386 that was good for 7th place. White was followed by Hunter Remy shooting a 378 and taking 11th place, Austen Sekerak placing 12th shooting a 373, Cole Luburgh taking 14th shooting a 368, and Donald Russell coming in 20th shooting a 306.

Overall Coach Steve Dietz was very pleased with his team's efforts in their initial competition for the year. "I think we had a strong start and I'm proud of our kids that competed today. We will continue to work on our focus and staying keyed in during competitions but I'm really excited for what lies ahead with this group. It's going to be a special year" said Dietz.

The Hawks will return to action when they travel to the USCA 3D National Championship at Sahara Woods State Recreational Area in Illinois, October 6th. 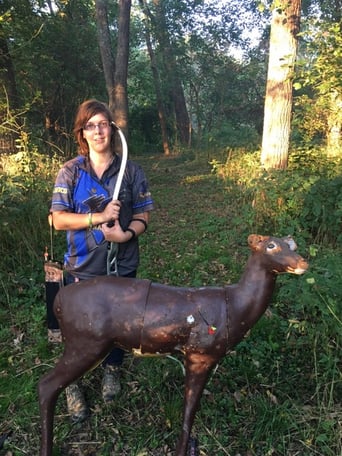