Nelsonville, OHIO—The Hocking College men’s basketball team exploded for 49 points in the second half to run away from the Rio Grande JV, 79-62, on Wednesday evening, Feb. 10, in the Hocking College Student Center. 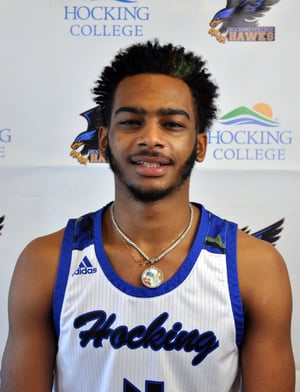 The game was evenly played throughout the first 20 minutes, with the halftime score tied at 30-30.

The Hawks caught fire after the intermission, outscoring the Red Raiders, 49-32. Rio led early in the second half, 36-32, and the game was tied at 40 with 14:30 left in the game. Hocking then went on a 15-0 run over the next four minutes to build a 55-40 advantage. The Hawks maintained a double-digit lead the rest of the way.

Hocking will take its 3-1 record to North Ridgeville, Ohio, on Sunday, Nov. 14, for a rematch with Bryant & Stratton at 7 p.m.

B&S handed the Hawks their only loss of the season in the season opener.