Hawks win big on the road 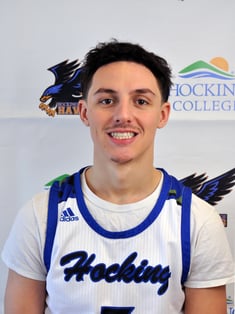 Sophomore guards Ryan Archey Jr. and Landon Sprigler once again led the Hawks scoring, both converting 10 of 16 shots from the field. Archey led with a game-high 28 points including 4-of-7 three-pointers. Sprigler — last week’s OCCAC Player of the Week — notched 24 points and added a team-high nine rebounds.

Four Hawks reached double-figures with sophomore forward Jeron Tinsley and freshman guard Keshonn Loury joining Archey and Sprigler. Tinsley had 15 points on 5-of-10 shooting, including 3-of-5 from beyond the arc, and Loury had 10 points. As a team, the Hawks shot 51% for the game (35-of-69).

Tinsley and freshman forward Tyree Robinson each had three steals to lead the Hawks’ total of 10 takeaways from KS-T.

The Hawks, 2-1 for the early season, were in control throughout, with a double-digit lead for the entire second half.

Hocking travels to North Ridgeville, Ohio, to play Bryant & Stratton on Saturday, Feb. 13. The Hawks dropped the season-opener to the Bobcats on Jan. 25.