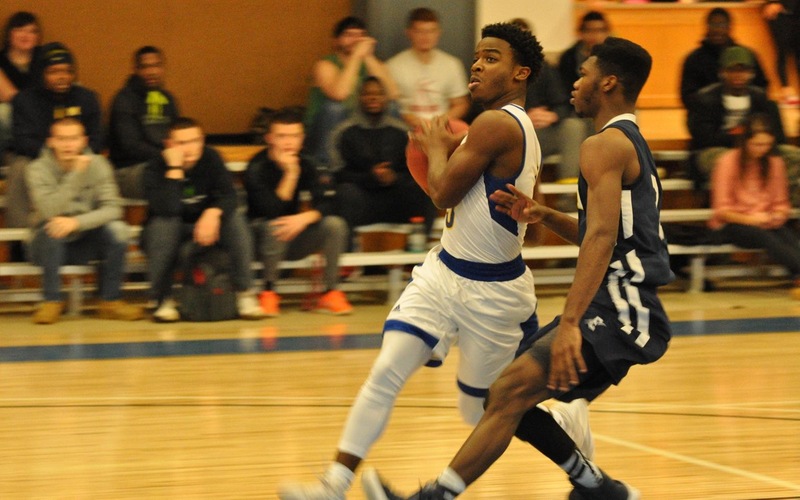 CHILLICOTHE, OH -- The Hocking College Men's Basketball Team opened the 2017-2018 campaign on Monday night when they travelled to Ohio University Chillicothe to take on the Hilltoppers. The Hawks opened their third campaign as a program and for the third straight season the Hawks start off the year with a win. Last year the Hawks kicked off the season with a 99-87 win at the expense of the Hilltoppers and the Hawks returned to the Shoemaker Center and came away with a 102-83 victory to start the 2017-2018 campaign.

The Hawks didn't waste anytime getting into a grove Monday night as they rushed out to a quick 10-2 lead over the Hilltoppers. Accurate shooting by Hocking guards Noah Davis and Terrell Washington helped the Hawks push the lead to fifteen at the 12:20 mark of the first half. THe Hawks continued to push the pace, holding a commanding 34-15 lead at the 8:00 mark in the first half. The Hilltoppers would make a late first half surge to cut into the Hocking lead before sophomore guard D'Andre Clay knocked down a clutch and-one three as the half time buzzer went off. Clay sunk the free throw to give the Hawks a 57-38 lead at the end of the first half.

The second half started off with a series of back and forth runs by both teams until they both found themselves in the bonus with 12:34 to go in the game. Both teams continued to trade free throws in a sloppy middle three minutes of the second half. The Hilltoppers then would test the Hawks over the next few minutes cutting the Hocking lead to 6 before the Hawks could regain the momentum and go on a 12-0 run pushing the lead back to 17.

The Hawks closed out the second half holding OU Chillicothe to just 3 points in the last 4 minutes of the game and Hocking College came away with a 102-83 victory.

Hocking College was lead in scoring by sophomore D'Andre Clay with 18 points, all coming in the first half. Clay was followed in scoring by Noah Davis (17), Kevin Camilo (16), Terrell Washington (14), Kendle Hicks (11) and Zach Dawson (10). Kendle Hicks paced the Hawks on the boards grabbing 14 rebounds. Romeo Parker and Demarious Green each also had 10 rebounds.

"While I see a lot of things that we need to work on to prepare for Columbus State in our OCCAC conference opener, I think we are all happy to get the road win as we prepare for our tournament this Friday and Saturday, said Hocking College Coach, Matt Williamson. "We are looking forward to this weekend and a tough schedule ahead of us this year. We are going to find out early what we are made of and just how good we really are. We are young this year with 9 freshmen on the roster so these guys are going to have to grow up fast in order for us to be successful."

The Hawks will return to action at the Hocking College Student Center on Friday, November 10th at 7 pm when they take on Cincinnati Christian's JV squad. They will then take on a tough Potomac State team on Saturday, Novemeber 11th at 5 pm.