NELSONVILLE, OHIO – December 15, 2020 – Since its initiation into the world of esports in 2016, Overwatch exploded in popularity, with more than 50 million players worldwide.

In just its second season at Hocking College, Overwatch has become a popular varsity sport alongside football, volleyball and others. These student-athletes are like every other athlete at the college; they're required to try out and practice and they are held to the same academic standard as every other college athlete on campus.

Overwatch is a team-based first-person shooter game with very distinct roles and a wide character roster.

Hocking College Esports Coach Gavin Edmondson describes Overwatch as "asymmetric because unless someone is playing the exact same character as you on the other team, you're playing against a completely different roster of abilities, which can make the games very interesting. Also, understanding how other characters interact either with characters on your own team or players on the other team is one of the aspects of the game I think makes it interesting."

How is it played?

Overwatch pits two teams of six players against one another. Teammates work together to fight for control over different objectives. Each character has different abilities and skills, including how they interact with other characters.

Each role is significant, and mistakes by one player can be detrimental to the team. Overwatch is a very objective-based game with a heavy emphasis on unity, communication and cohesion.

This season for the Hawks is going well.

While there isn't a specific method to determine an overall ranking, the Hawks were undefeated in the preseason. Going into the main season, they have a winning record in league play. 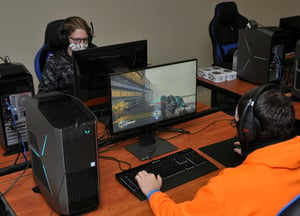 Edmondson considers the NJCAAE the more important conference because it's the league where the Hawks matched with other community colleges, making the playing field more competitive.

The NECC is an open conference that any college can join. However, this means that smaller college teams like Hocking play against institutions with multimillion-dollar budgets.

Typically, the Hawks have matches every Wednesday and Thursday. Sometimes, the team will also have scrimmages set up with different schools.

Athletes spend at least two days a week practicing and additional time improving their skills to be part of the competitive team.

"The team here at Hocking takes Overwatch very seriously, and while they are willing to help one learn, they would need to be dedicated to the game," esports athlete Nathaniel Adkins said.

Together Everyone Achieves More

Teamwork is the basis of Overwatch at Hocking College, with several players describing the atmosphere as being like a community.

"Basically, everything I know about the game, I know it because of my teammates," Samuel Colburn said. "They are always trying to help me with things that the game just doesn't tell you, and it would take me months to learn on my own."

The biggest change for many of the athletes is switching from console gaming system to computer.

Breanne Williams, who had no experience playing on a computer, joined the team last year and within a month or two, was chosen to be part of the competitive team and still is today. Even if you have little to no background or experience playing Overwatch, a willingness to put in the work to improve and a passion for the game are important.