North Ridgeville, Ohio—The Hocking College men’s basketball team (D-III) avenged a season-opening loss to Bryant & Stratton (D-II) with an 83-79 come-from-behind victory in North Ridgeville, Ohio, on Sunday evening, Feb. 14. The win was the fourth in a row, giving the Hawks a 4-1 season mark, 2-1 in the OCCAC. 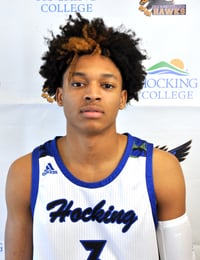 Sophomore guard Ryan Archey Jr. — making a case for OCCAC Men’s Player of the Year — scored a game-high 30 points, one shy of his career-best single-game point total. Archey — last week’s OCCAC Player of the Week —connected on 12-of-19 shots, including 4-of-9 three-pointers, and added nine rebounds for the Hawks. The Hawks out-rebounded the taller Titans, 51-45 and shot 43% from the floor compared to 35% for the home team.

Once trailing by 16 points, the Hawks’ defense spurred the comeback, with freshman forward Nicholas Lutz providing the defensive spark.