NELSONVILLE, OHIO—To anyone passing by it might have looked like Ron Cass was standing in the middle of a creek picking up rocks and talking to himself, but that’s not quite what he was doing.

With a rock in one hand and his cell phone in the other, Cass, an instructor in Hocking College’s School of Natural Resources, was conducting a virtual spring field biology class in Wayne National Forest.

Like other instructors of pre-school to college-aged students around the country, Cass and his Hocking College colleagues had to adapt quickly when in-person classes were suspended in late-March due to the COVID-19 pandemic. That’s something that could prove particularly challenging for a school like Hocking that prides itself on hands-on learning.

“The reality is if we taught field biology all in a lecture, our students would walk out of here with very limited knowledge and experience,” Cass said. “We are what we are. We’re a hands-on school.”

For Cass and the other field biology instructors the challenges of distance learning began before classes even restarted. On the first day of class, students receive a kit with about a dozen tools they’ll need to make observations in the field. Cass and fellow instructors Homer Elliot and Cynthia Bauers packaged about 150 field kits and with Natural Resources Office Manager Debbie Arnold addressed and mailed them to students’ homes throughout the country.

Then came the challenge of teaching a hands-on course without being with your students.

To give his students that experience Cass is taking his phone to the places he’d normally take his students and video conferencing with them.

“I’m walking through the woods with them live, and they seem to appreciate it,” he said. 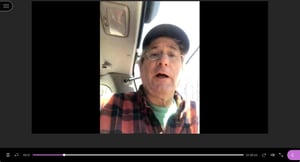 Before he went live from the creek, Cass collected samples and put them in the back of his SUV. He showed them to students before walking through the woods, stopping to point out flowers in bloom, buds on trees, frogs jumping into pools and beaver dams.

“With what we’re doing right now, I’m taking them out into the forest with me and at least they’re hearing me talk in the forest and getting a view of the forest,” he explained. “They’re watching me pull insects out of the water and salamanders from under the logs. It’s working. It’s not ideal, but I think these students are actually looking forward to this class.”

Giving students a sense of normalcy is important to Lynn Holtzman too.

“I want them to get out in the field,” the Wildlife Resources Management program manager said of his ornithology students.

Holtzman’s taking a slightly different approach than Cass. He’s bird spotting on his own and recording the video and audio of what he finds using a spotting scope with a special adapter to his phone. Then he edits the video and posts it on his YouTube channel.

The videos reflect the challenges students would have bird spotting in the field and Holtzman is there, providing real-time narration, describing the birds he’s recording, just like he would in a face-to-face class.

“I wanted it to be more realistic,” he said. “I didn’t want it to be the dressed up perfect image of birds, either by sight or sound — not that I could do that anyway — because that’s not what you’ll get in the real world. I wanted to create a situation where they’d feel like they were there.”

Holtzman’s videos act as an introduction to his labs.

His students use their four-hour lab time to go out on their own and find birds, starting with five in the first week and ending with more than 20 a week by the end of the course.

They log data about the species they observe on an app managed by the Cornell Lab of Ornithology at Cornell University, just like birders across the country do to monitor regional bird populations. The students’ information is fed to Holtzman who can make sure the species matches the observations.

“It’s a good way for them to learn how to collect, record and submit accurate data like a professional would and it gets them in the field,” he said.

The field biology students are also getting outside with an eight-week long project to observe a location and journal about how it changes over that time.

Cass said the students go to their place and sit silently for about an hour listening, watching and smelling; observing the changes to the environment as spring progresses.

“They’re exploring natural environments near their homes,” he said. “It’s kind of cool because a lot of them are off in grandpappy’s creek that they played as a kid, but now they’re looking in these creeks and these environments at home with a much different eye.”

Cass said there’s no doubt that the trips outside are helping his students as they socially distance themselves from others. They’re required to visit their spot once a week, but Cass said most are going back daily.

“I’ve heard the comment again and again: ‘This is so great. I have to go outside,’” he said with a smile.

Keeping in touch from a distance

Susan Dietz’s students are also trying to keep the routines they’d established before the stay-at-home order.

During a semester her Early Childhood Education students spend at least 170 hours in a classroom or childcare center assisting teachers, preparing and presenting lessons and working one-on-one with children. With schools and most childcare centers closed, Dietz’s students are still interacting with the classes they were observing, albeit from a distance.

“My students are offering their cooperating teacher a weekly video that includes a story read to the children or a craft they can complete,” Dietz said.

Dietz said the plan not only gives the teachers “additional help in this challenging time,” but it allows her Hocking College students to see “the flexibility of design it takes to be a productive educator who serves the needs of the children placed in their care.”

It isn’t just early childhood educators who need to be flexible, as Chef Touria Semingson can attest.

The Culinary Arts professor has had to adapt her baking labs to a very unusual situation.

Without being sure what ingredients or tools her students have on-hand, Semingson’s had to adjust what she asks her students to bake.

“We made some no-kneeding bread,” she explained. “You just mix it with warm water, some yeast and salt and you let it proof as long as you want and the then you bake it.”

She said some of her students have more ingredients enabling them to bake more complex items. 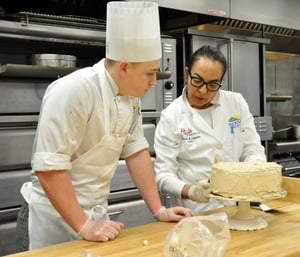 A lot of the baked goods she’s asked students to make can be mixed by hand.

“A lot of the breads look O.K., some of them look like they’re trying to escape,” she said with a laugh. “My student will say ‘O.K., chef, this one didn’t work out. I’m going to try it again.’ But they’re working and they’re hands-on, and with baking and culinary arts you have to be hand-ons. You have to keep on your skills or you’ll lose them, especially when you’re just starting out.”

The only way she has to judge her students’ finished products is through pictures, but Semingson says that isn’t a problem.

“With the pictures, I can tell them if the oven temperature was too high or if they needed to let it proof longer,” she said. “When you do this for as long as I have you can tell if something’s wrong and you can tell what it was that went wrong.”

Semingson has also brought back lessons she’d stopped using to help give her students another perspective: She’s split them into groups and had them write a proposal for a bakeshop. They have to decide how large of a building they want, what the retail and kitchen space will look like, create a menu, decide what equipment they’ll need to execute the menu and how many employees they’ll need, and how much they’ll need to sell to have a viable business.

Students aren’t the only ones learning

Semingson said the transition has been the most difficult for her newest students.

“It’s difficult because I’m not there to see if they’re kneading it enough or letting it sit long enough,” she said.

“It teaches you to have patience and be available to them,” she said.

She’s told her students she’s available five days a week and said she’s received text messages in “the middle of the night” asking for advice or recipes.

Dietz said some of her lessons have shifted to “address how the classrooms (her) students serve in the autumn will have different needs and challenges.”

When in-person classes resume, Cass and the other field biology instructors plan to continue having students take photographs of plants and animals in the wild and turn them in with identifying information.

“They’re creating a databank of their own slides that they can use in future classes or in the profession,” he explained.

Likewise, Holtzman said he’s going to continue to use some of the new digital aspects of his ornithology class, including adapting his cell phone to his spotting scope to make it easier for students in the field to see what he’s seeing.

While Kelley was talking specifically about the efforts in Natural Resources courses, he could easily be talking about the college as a whole.

“Many of these instructors could have easily posted links to videos that exist on the internet, but instructors are going out of their way to maintain the continuity of their curriculum,” he said.

And it’s not just the instructors who are impressing people.

“I am impressed with how well the students have adapted to the abrupt change and their willingness to remain engaged,” Dietz said. “This shows they will be productive in whatever their careers bring to them as the years progress.”