How to Study Your Handwriting and What it Means

students, things to do, Activities, lifestyle

National Handwriting Day is upon us and with more people using electronic devices to communicate, its growing importance is not lost on the world.

This unofficial holiday started in the 1970s with a goal of celebrating handwriting. It falls every year on January 23, more famously known as John Hancock’s birthday. Hancock is best known for his abnormally large signature on the Declaration of Independence.

the study of graphology

Some people believe that a person's handwriting provide specific insight into what they are like as a person. This is referred to as graphology, or the study of personality through one's handwriting.

Despite this, there are many critics of graphology. According to an article in the Queen's Journal:

Dr. Cynthia Fekken, a professor in the Queen’s psychology department specializing in personality theory and assessment, said current psychological opinion of graphology finds it entirely lacking in merit, ranking it with astrology, palm reading, and even the reading of tea leaves.

Either way, graphology is a fascinating field that dates all the way back to the 1800s.

Want to learn more about graphology? Check out these tips and tricks to see what your handwriting says about you.

1. start with a Good Sample

In order to start your analysis, you must start with a good sample. Have a friend write a couple lines of text in cursive on unlined paper. Because writing can change with mood, have them write a second sample a couple of hours later.

2. pressure of the strokes 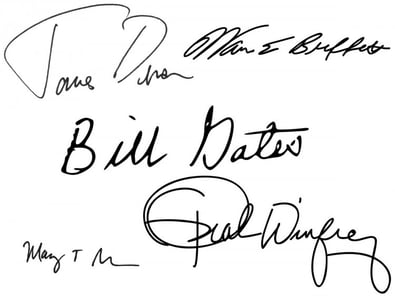 When we write, some will use a harder pressure while others use a lighter stroke. This can be seen in the boldness of the font, as well as the pressure marks on the back of the paper. According to WikiHow:

3. Slants of the lettering

When reviewing the cursive, do the letters seem to be tilting to the left or right, or are they perfectly vertical?

A right slant shows up when the writer is eager to write, or writing quickly and energetically. If this happens often, the writer might be assertive and confident.

A left slant could mean an unwillingness to write, or a desire to hide emotions. Some say these writers are less cooperative than people who slant to the right.

A straight vertical slant might mean the writer keeps their emotions in check.

4. Look at the Baseline

When someone writes on an unlined piece of paper, most people have a tendency not to write in a straight line. The direction of the baseline of your text might be indicitive of your mood.

According to WikiHow, upward writing is said to show optimism and a happy mood, while downward writing may be a sign of discouragement or fatigue. If you notice someone who has wavy writing, that could mean they are an unstable or uncertain person, or an unskilled writer.

5. Evaluate the Size of the text

The size is also indicative of one's personality. Larger signatures (such as that of John Hancock's) are typically representative of someone who is extroverted and outgoing. People who are shy or introverted tend to have a smaller signature.

For more tips on how to analyze handwriting, check out some of the below resources.