The Hawks came out firing early, keeping the game close in the first quarter, but they were unable to get the lead back after starting the game with a  4-0 advantage. 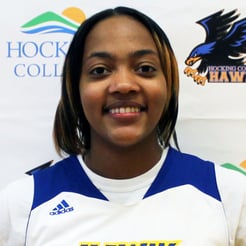 ed the game with a 32 points — 18 in the first half and 14 after halftime — and 8 rebounds. She shot 48.1% from the field, and knocked down both 3-pointers she attempted. Her career night was the fifth best single-game scoring performance in the five year history of Hocking women’s basketball.

Freshman point guard Jada Lazaro added 19 points for the Hawks, as well as 8 assists and 6 steals providing a strong all-around performance. Statistically, Hocking was able to keep pace with the Cougars in steals and blocks. Hocking recorded 8 steals and 4 blocks, while the Cougars had 12 steals and 7 blocks.

The Cougars had six players score in double digits, with Chloe Davis contributing a team-high 17 points. Davis started the game hot, scoring 11 of her 17 points in the first half. She finished the game with a double-double, going 7-for-12 from the floor as well as adding 10 rebounds.

Olivia Daniels registered a double-double of her own for the Cougars, snagging 15 rebounds and adding 15 points. She contributed 5 steals as well, putting her halfway to a triple-double on the night. Daniels finished the game shooting 53.8% from the floor, going 7-for-13.

The Hawks next will travel to Cuyahoga Community College on Saturday, Jan. 25 for a 1 p.m. tip off against the Triceratops. This will be the first of three straight away games for the Hawks. They return home Saturday, Feb. 1, to host a men’s and women’s doubleheader against Lorain County Community College. Women’s tip-off is at 1 p.m. followed by the men at 3 p.m.