The Hocking College women’s basketball team (0-7) hosted Edison State Community College (12-2) on Wednesday night, January 15, and were eventually overpowered by the Chargers, 83-45. The Hawks kept the game close in the first half, trailing just 29-21 in the second quarter.

The Hawks were unable to get a lead during the game, however they only trailed at halftime by 10 points, 40-30. The Chargers’ Audra Schaub scored four three-pointers within the first half alone -- keeping the Hawks at bay -- and finished with a game-high 22 points. 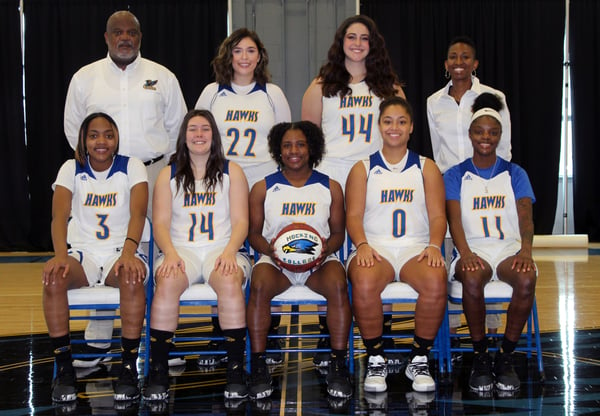 The Hawks only managed to score 13 points in the second half as Edison State ran away to a 45-13 second half advantage.

Peyton Campbell sat the game out with an injury, leaving the team with only five players. This put the Hawks in foul trouble entering the third quarter. The outmanned Hawks were outscored in the third quarter, 27-4 .

Edison State’s Brogan McLuer score 10 of her 14 points in the paint, taking advantage of the Hawks foul trouble. Mariah Baker added eight points in the second half and finished with 12 as did Sarah Pothast.

The Hocking College men’s basketball team (10-6; 0-3) lost at home to a talented DII Edison State Community College Chargers team (8-7; 3-0) Wednesday, January 15, 86-73, dropping the Hawks to a season record of 10-6 after losing their fourth contest in a row, and 0-3 in conference play. Hocking tried several lineups as coach Ryan Miley rotated 11 players into the game.

Hocking started the game hot with a 7-0 run, all scored by freshman forward Shawn Paris, Jr. Paris would finish the game as Hocking’s top scorer with 16 points. Freshman guard Lemuel Holt would be the second-highest scorer for the Hawks with 13 points, 11 coming in the second half. Freshman point guard Landon Sprigler contributed 10 points. Hocking held the lead until 8:39 left in the first half, when a 3-pointer by Edison State gave the Chargers a 23-22 lead. The Chargers would keep the lead for the remainder of the game.

Edison State was led by Ronald Hampton III who finished the first half with 14 of the team’s 44 first half points. Hampton finished with a game-high 26 points, including 8-of-12 from the foul line. Reiko Bagley, Jr. would add 11 points for the Chargers in the first half, including three three-pointers. The Chargers led at halftime, 44-35.

Shooting from the foul line helped Edison State keep the lead away from the Hawks. Edison would finish the game going 22-of-33 from the line (66%), compared to just 7-of-12 for the Hawks (58%).

After a game at Owens Community College on Saturday January 18, the men will return to Hocking for their next home game on Monday, January 20, against Southern State Community College. Tipoff for the game is set for 7:00 p.m.