By the time she was in the eighth grade, Davis was already on her way to becoming a seasoned show-business professional with a resume that showcased her budding dancing, singing and modeling abilities.

However, after being cast in a high school production of the Tony Award-winning musical, "Bye, Bye Birdie," she made what she described as "a natural progression" towards becoming a theatre professional.

Davis's love of theatre was also nurtured when she attended Piketon High School. Although the school had no formal theatre program, the students and faculty had a long-standing tradition of putting on a full-scale musical each spring.

At Piketon, Davis enjoyed playing the leading roles of Sandy in "Grease" and Miss Hannigan in "Annie."

Along with establishing some life-long friendships, Davis learned firsthand how becoming involved in theatre at a young age can help young adults build their sense of self, belief system and clarify their goals.

More importantly, Davis discovered how theatre can entertain and teach audiences about themselves and the world in which they live.

After high school, Davis attended Shawnee State University. There, she once again found herself attending a school that didn't have an official theatre program. She worked with her advisor and dean to create an individualized studies program concentrating on the performing arts.

As a result, the program Davis helped craft at Shawnee State gradually grew into a full-fledged major that offered students the opportunity to earn a Bachelor's of Fine Art in Musical Theatre.

Davis got opportunities at Shawnee State to serve as stage manager, director in productions, and the title character in the musical "Sweet Charity."

Davis holds a bachelor's degree in Independent Studies from Shawnee State and a master's degree in Liberal Studies from Ohio Dominican University. While studying at ODU, she worked as an intern at CATCO Theatre in Columbus, Ohio.

Some of the job titles Davis has held over the years are as follows:

While working professionally as a theatre director, educator and stage manager, Davis made an "on-stage" transition from acting to performing in avant-garde rock band Necropolis and then garage-rock band Ipps.

She has been performing as a singer and keyboard player since 2002, traveling nationally and playing music festivals, including South by Southwest and CMJ Music Marathon, releasing records that have been distributed worldwide, and even appearing as a guest vocalist on other bands' recordings.

During her 26 years in the theatre, Davis has performed every task imaginable — from running a youth theatre program in Columbus to selecting scripts, holding auditions, casting, scheduling and running rehearsals, designing sets and costumes, procuring props, managing the performances backstage and designing the programs.

The topics her Communications and Theatre program will cover include acting, script analysis, stagecraft and creating hands-on learning opportunities for students every semester. 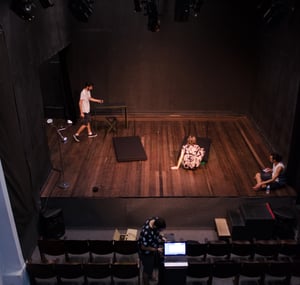 According to Davis, the program "will be focused on providing opportunities for practical experiences that could lead to employment in the field of theatre upon graduation, or which students could directly transfer into a four-year degree program."

Since the program isn't scheduled to launch until Autumn 2021, Davis wants to assemble a group of students this fall to perform outdoors and staging small-scale productions such as one-act plays.

Long-term, she would like to initiate a partnership between her program and the college's Film and Video Production program. Davis believes the collaboration would give her students opportunities to perform that won't put the public's health or safety at risk during the COVID-19 pandemic.

Overall, Davis wants her program to reflect her belief that taking theatre courses can benefit any student — regardless of their major. She explained that taking an acting class could help students explore body language techniques, different communication styles and various presentation skills that could help them succeed in any foreseeable profession.