You may start seeing a lot of rainbow decorations popping up this month and yes, there’s a reason for it. June is Pride Month which celebrates the lesbian, gay, bisexual and transgender (LGBT) community, as well as the history of the gay rights movements.

Pride Month is celebrated to honor the 1969 Stonewall Riots that took place on June 28, 1969. This day soon grew to encompass a month-long series of events, which now includes parades, picnics, parties, workshops, concerts, and more.

How Can I Celebrate Pride Month?

Below you'll find several nearby events taking place in celebration of Pride month.

Athens Pride Fest - Swim & Picnic
June 9 • 1PM — 6PM
Athens City Pool
With the help of Athens Pride Fest sponsors, SEORA has rented out the city pool for the afternoon. Free food will be available, as well as food trucks for those who may want something different.

Athens Pride Fest - Drag Queen Story Time
June 29 • 2PM — 5PM
Athens Public Library
A selection of drag performers will read LGBTQ inclusive children's books for kids of all ages! A selfie corner with props will also be set up for kids to take pictures with the performers.

How Can I Get Involved?

The Columbus Pride parade is looking for volunteers to sell drink tickets, as well as pour beer during the event. For those who are interested in volunteering or would like more information can visit their Eventbrite Volunteer Registration page. 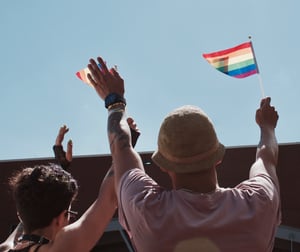 Hocking College also has an LGBT club called the Inclusion Club/Rainbow Alliance. This club is for lesbian, gay, bisexual, transgender students and friends to meet and socialize. This club participates in various social events including dances, shows, and trips. Those students interested in joining can contact Kim Coy at (740) 753-6539 or by email at coyk@hocking.edu.