What is the Crawford Park District?

According to their mission statement, the purpose of the CPD is to "create, preserve, protect, and manage a system of parks, nature preserves, and outdoor recreational facilities held in public ownership by the citizens of Crawford County for the leisure use and enjoyment of this and future generations, with a focus on local culture, historical and natural resources.” 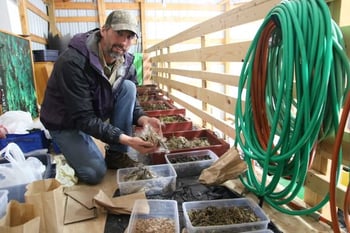 How Did Dyer Get His Start With the Crawford Park District?

Dyer’s relationship with the CPD began while he was a senior at Colonel Crawford High School in Bucyrus, OH. He began by volunteering at the park until he decided to become a student at Hocking College.

Soon thereafter, Dyer was hired by the park district to function as a part-time maintenance man. Then, after earning his associate degree in Interpretive Services from Hocking College, he spent the next few years as a farmer until the CPD offered him a position as a park naturalist.

Beginning in 2007, Dyer was hired by then director, Bill Fisher, to fill the position of Program Coordinator. In October 2018, Fisher decided to retire and Dyer became his successor.

What Kind of Impact Has Dyer Had?

Perhaps Dyer’s most noted accomplishment while working for the CPD was developing a summertime nature day camp. Open for children ages 5-12, the camp offers participants opportunities to learn how to canoe, hike, attempt sports like archery, and meet some of the winged and web-toed inhabitants of the forest.

Are There Any New Projects in the Works?

Under Dyer's leadership, the first major task the CPD will undertake is a 38-acre expansion project across the street from the Lowe-Volk Nature Center. This project will involve creating walking paths and seeding the area with native prairie plants.

For more information on this program, please contact the Program Manager, Jason Szostek, by email at szostekj@hocking.edu or by phone at (740) 753-6259.