From Legal Briefs to Barley: How a Fermentation Science Student Brewed Himself A New Career

When Gallipolis, OH native Benjamin Saunders decided to enroll in Hocking College’s new Fermentation Science Program, his dream of one day owning his own distillery finally came to fruition. Who is Benjamin Saunders?

Saunders is a 2011 graduate of Gallia Academy High School. After high school, he worked for the Ohio Department of Transportation, served as a juvenile supervisor and law clerk for the Gallia County Probate, and took a position as a paralegal in the office of his brother, Attorney Thomas E. Saunders.

When Saunders began studying Sociology/Pre-Law at Ohio University in 2016, it seemed evident that he was destined to follow in his brother’s footsteps and become a lawyer.

However, fate intervened in 2018 when Saunders' mother, who's a school teacher, shared a story with him about Hocking College’s upcoming Fermentation Science Program that she had discovered on the internet. In response, he was inspired to drop out of Ohio University, change his major, and enroll in this new, four-semester program.

Saunders stated “I knew I really didn’t want a career in an office setting and my interest in brewing and distilling had always been there."

Since he began working there in 2016, Saunders has gradually worked his way up from bouncer and bar back to bartender. In addition to his regular job duties, Saunders also earned a Level One Cicerone Server Certificate.

Saunders also credits this job with cultivating his interest in fermentation science. He stated that, “I had already been asking the brewers at Jackie O’s and talking with them about the (brewing) process and that really drove my passion for fermentation even more.”

Eric Hedin, who's an instructor in the Fermentation Science program, stated that some of the factors that made Saunders an ideal candidate for this program included, “his motivation, his age, working at a brew pub, (and) his willingness to learn.”

What Did Saunders Learn in the Program?

Saunders learned how to set up the step-by-step process that goes into making beer, as well as becoming more knowledgeable about the business-oriented aspects of owning and operating a distillery.

Where Are Classes for the Fermentation Science Program Held? 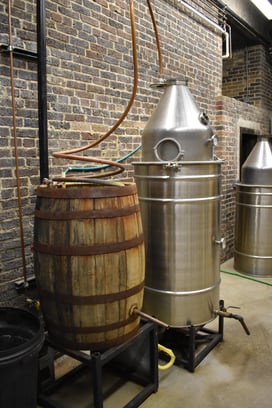 The former Straitsville Special Moonshine Distillery, which is located at 105 W. Main Street in New Straitsville, was revitalized by Hocking College and is where fermentation science classes are held.

What Aspects of the Program Did Saunders Appreciate the Most?

Saunders enjoyed the hands-on manner in which the classes are structured. He noted that, “this (program) was also a much better fit for me as I’m a hands-on learner and most of the job is 90% hands-on.”

What Are His Plans for the Future?

Although Saunders wants to keep his career plans open, some of his tentative goals include creating a gluten-free beer, using local sustainable products to produce his beer, and opening up a distillery in Gallipolis & incorporating the history of his hometown into his business.

Where Can I Get More Information on the Fermentation Science Program?

For more information on Hocking College’s Fermentation Science Program, contact Program Manager Sean Terrell by email at terrells@hocking.edu or by phone at (740) 753-7149.